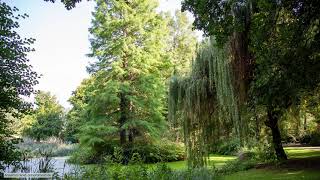 From high atop the Großer Stern, the goddess of Victory peers down at Großer Tiergarten, the second largest park in the city. Originally a hunting ground for Prussian rulers – many of the park’s sculptures are testament to this history – the forested area was made accessible to the public in the 18th century. Step by step it was turned into a landscaped garden. During the Second World War, many city residents gathered firewood in the park; by 1948, all the trees had been cut down and Tiergarten was a desolate wasteland. In the 1950s, the historic park was triumphantly and magnificently reconstructed and many different styles of garden art, such as the baroque garden style and English landscape garden, were restored. In summer, why not do as the Berliners do and sunbathe on one of the many meadows in this over 210-hectare park or relax under a tree near the water? 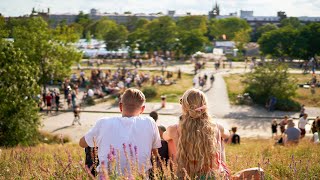 The best view of Mauerpark is high up on Friedrich Ludwig Jahn Sportpark, where a piece of the Hinterland wall still stands – made colourful by graffiti artists. This area was a no-man’s land after the Berlin Wall was built in 1961. When the iron curtain fell, activists fought to preserve this urban open space. Since then, the park has achieved cult status and is often very full, especially in summer. Here, you can listen to street musicians in the amphitheatre or simply hang out like the hordes of young party goers from around the world. You can also get sporty, scale the Schwedter Nordwand climbing wall, bring kids closer to nature in the little farm or grow vegetables in an intercultural urban garden. The flea market next door is also popular. 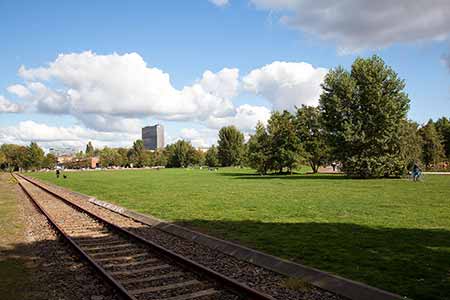 Since 2013, one of Berlin’s most modern parks stretches over the nearly 26 ha of land, which were once a dense network of tracks between Potsdamer and Anhalter railway stations. Made desolate by the war and left to lay in ruins when the Berlin Wall was up, this area was later blocked for redevelopment because of ecological concerns. This was not only good news for the locals: its central location also makes the park attractive to tourists. Situated just west of the U-Bahn station Gleisdreieck, there is plenty of room for all sorts of sporty activities including a fitness park for outdoor workouts and balance exercises, skate ramps, and fun times for kids with the many trampolines, climbing frames and sandboxes. The park is framed by a bizarre juxtaposition of private allotment gardens, criss-crossing railway tracks and new blocks of luxury flats. 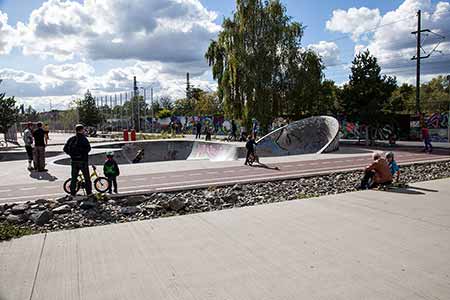 With the exception of a large and very popular skater pool, the eastern side of the park is rather peaceful. For some relaxing cloud spotting in Berlin’s skies, a large sunbathing lawn stretches out between two wooded areas with overgrown railway tracks. The smooth paths are a joy for walkers and bikers alike, and a converted signal box cabin entices with snacks and a large selection of beverages. Train enthusiasts pilgrimage to Yorckstraße for the nearly 20 defunct railway bridges standing closely side by side, which give impressive testament to Berlin’s transport history. If you cross one of the bridges by foot, you will also reach the bottleneck park to the south where you can explore the flora and fauna or get in a little exercise after a long day at the office. 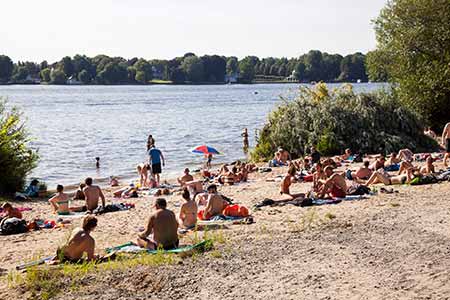 The Havel river, whose source is located in Müritz National Park, creates a picturesque landscape at Berlin’s western border. Since the 1990s, the major decline in industry in Brandenburg and Berlin has helped improve the river’s water quality, much to the delight of summer loving Berliners. You’ll find many small beaches and swimming areas along Grunewald. Although a bit of a walk from Havelchaussee, Kuhhorn is a particularly beautiful spot. If you take a stroll down the shore towards Grunewaldturm, you’ll also discover more beaches. 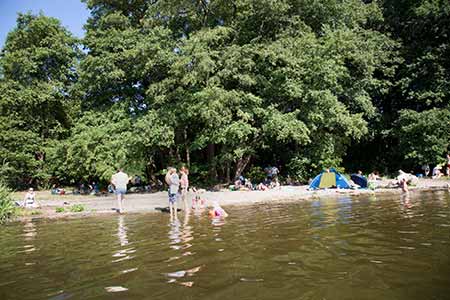 The eastern Havel shore curves back sharply to form Lieper Bucht, a bay which is supervised on weekends by the DLRG rescue station. The beaches here have the advantage of being well-removed from boat traffic, which can be annoying in summer. With its combination of sandy beaches and grassy, tree-shaded meadows, this area is perfect for both those who prefer to stay in or out of the sun. Because it can be easily reached by public transport as well as by car, this beach is especially popular with families. If you like things a bit quieter, it’s best to seek out one of the smaller bathing areas on the bay’s northern shore. 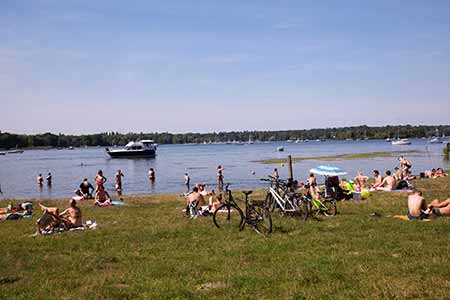 Though it’s quite the journey to reach this beach at the edge of Berlin’s city border, it’s well worth the trip. The large grassy meadow, peacefully shaded by pine trees, is roomy enough to find a restful spot even on the hottest days. Why not combine this day trip with a bicycle tour to Potsdam; you’ll find some of the most beautiful parks and palaces in the area right behind Glienicker Bridge. 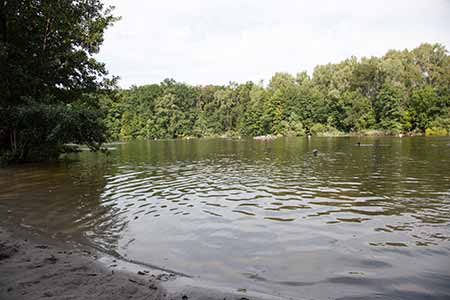 Although this lake is relatively small, it has a huge area for sunbathing. Because it is so close to City West, it can become very crowded on hot days. Some flock to this lake for the freedom to bathe in nothing but their birthday suit – all areas are clothing optional – while others prefer to stay away exactly for this reason. The most alternative and funky beaches are best reached by bicycle or a half hour stroll across Teufelsseechaussee from the S-Bahn station Heerstraße. Teufelsberg is not far from here, and also well worth a visit. You can also indulge in a little organic kaffee und kuchen at the Ökowerk bistro, located directly at the lake. 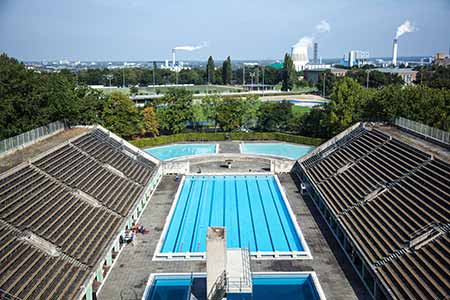 If you would like to experience what it’s like to swim laps at a historic swimming stadium, then the outdoor pool at Olympic stadium, built in 1936, is just the place for you. Though in need of renovation, the facilities definitely have their own special charm. With a 50 metre Olympic-size pool and a ten-metre-high diving tower – erected complete with elevator system for the 1978 World Swimming Championships – the pool follows international Olympic standards. If they ask nicely, the lifeguard is happy to open the tower for any daredevils. A large sunbathing lawn is located behind the bleachers where you can spend a relaxing day in the sun. Admission fee charged. Tip: Why not combine a visit to the Olympic stadium with a cool dip in this historic pool? 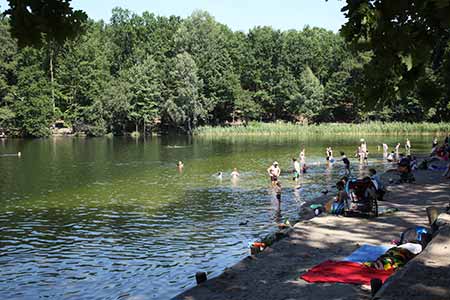 With its long shore, Krumme Lanke is one of the most popular lakes in Berlin’s south west. You’ll find several places for bathing along its shores and there is also a large grassy area. Since the water quality is very good, it’s not surprising the local Zehlendorfers flock to its shores in droves on hot summer days. A leisurely stroll down the shore’s beautiful path – around 1110 metres long – is great no matter what the season! Krumme Lanke is the nearest U-Bahn station, which is on the U3 line. More adventurous souls can also wander through the natural reserve Riemeisterfenn to Jagdschloss Grunewald. 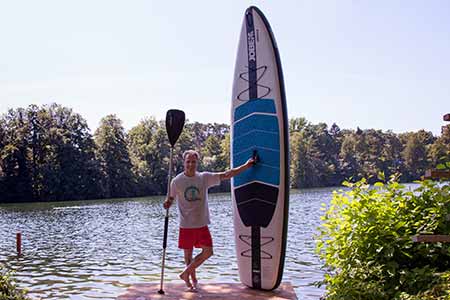 The largest lake in the Grunewald chain of lakes, Schlachtensee offers many places for bathing. The lake covers around 31 hectares and is approximately 8.5 metres deep. When the weather is good, the grass lawn located directly at the S-Bahn station Schlachtensee is completely overrun. If you would like to explore the lake in comfort, be sure to hire a stand up paddle board at the rental service next to the Fischerhütte restaurant, near the second grassy area. Not only a sporty workout, the board also makes a great sun lounger to quietly enjoy this wonderfully serene lake! Why not end the day with a cold one at the large biergarten near the water? 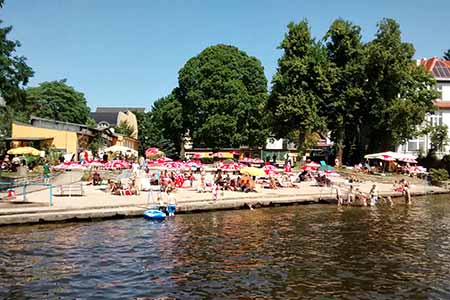 The historic seaside resort Friedrichshagen on Großer Müggelsee is a true gem among Berlin’s paid entry beaches. It’s breath-taking white sand beach stretches far out into the water. The 5-metre-high dive is sure to make the hearts of younger bathers beat faster. If you like to hang out on the water, be sure to use the large, wooden pier on the left. The well-maintained, crisp green lawn at the back of the beach is shaded by several large trees. The deck chair and boat rental service, beach volleyball court and snack bar make the package more than complete. What more could your heart desire?

Located on Großer Müggelsee’s northern shore, this heritage preserved beach is a lovely place for a swim. You can still see traces of the German architect Martin Wagner, who designed the 160-metre-long terrace with stairs down to the beach in 1930. The beach recently underwent a partial renovation and now has changing rooms, toilets and a small beach market. During the GDR era, the size of the area was increased by around 21 hectares. Since then, sun worshippers have flocked to this 500-metre-long beach which fades into the park. They say the beach has enough space for 25,000 bathers. Although the beach is free of charge, the number of bathers present at one time is luckily much lower than this!

Kleiner Müggelsee, which feeds the river Spree, has a beach between Alt-Müggelheim and Rahnsdorf near the restaurant Neu Helgoland. Around 90 metres wide, its sandy beach is beautifully lined with pine trees and is reminiscent of a large sand dune. Although a lovely place for some sunbathing and cooling off, swimmers craving longer distances may be less drawn to the beach. On the weekends, lifeguards from the Arbeiter-Samariterbund keep a watchful eye on bathers. Tip: A trip to this beach can be perfectly combined with a bicycle trip around Großer Müggelsee. 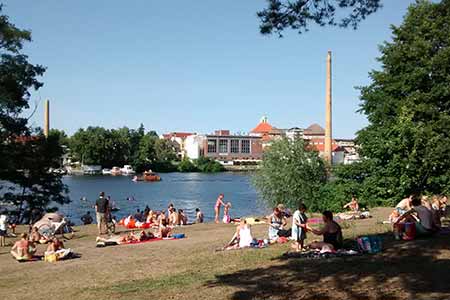 Why not spend a relaxing, hot summer day at Müggelspree with a view of the old Berliner Bürgerbräu brewery? Located on the south bank, this lovely beach, known as Teppich (rug) beach, has both tree-lined meadows and sandy areas. From Friedrichshagen, you can best reach the beach through the Spreetunnel. Built in 1927, this pedestrian tunnel allows you to cross directly under the Spree river. Enter at Josef-Nawrocki-Straße on the north side; once you exit in the south, walk 150 metres to the west until you reach this beach on the Spree. If all that swimming made you hungry, why not make your way to nearby Spreearche for a snack? 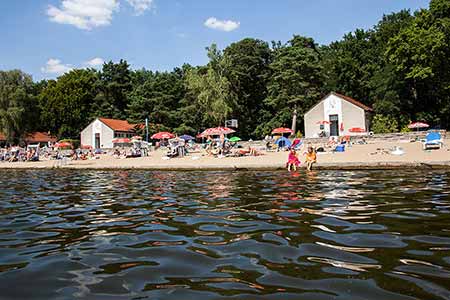 Though the wooded shore of the Dahme river at Wendenschloss public open air bath is tranquil, it also has a touch of what you might call old style Berlin. This 120-metre-long sandy beach attracts everyone from sun worshippers to picnicking families to old men lost in a game of chess. The atmosphere is very relaxed and worlds away from the mass tourism and hipster alert you find in the city centre. You can take a swim here with a view of the Grünauer regatta course as well as rent a beach chair or sun umbrella at amazingly low prices. The changing rooms and toilets are simple, but clean. Though the slightly dusty, bygone era feel of the place might not be for everyone, the calm atmosphere can be very relaxing.